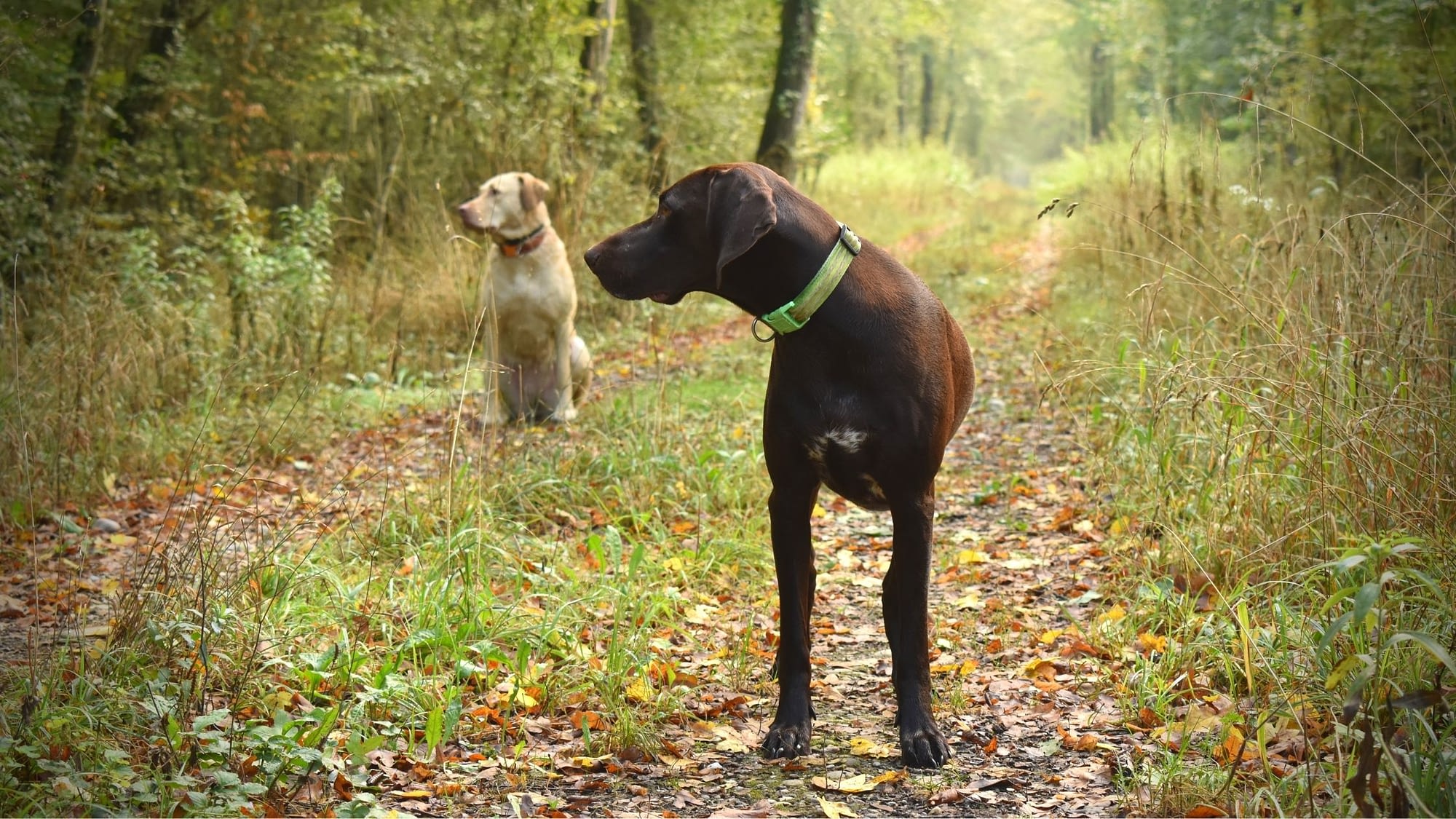 Floppy ears of your hunting dog, according to scientists, are an unintended consequence of humans selectively breeding dogs for various characteristics, which caused stem cells to malfunction for unexplained reasons.

Domestication of dogs, specifically deliberate breeding of dogs for particular traits and to perform specific tasks, like hunting, has resulted in floppy ears.

One of the benefits of long floppy ears for hunting dogs is that they work as a “scent gathering device.” They help catch invisible scent particles and direct them towards your dog’s nose to aid him in his hunt.

Floppy ears do not seem to have any detrimental effect on the dog, unlike other characteristics resulting from breeding, such as the flat face and snub nose of some dogs, which greatly hinges on their breathing. In contrast, owners do need to spend a little more time cleaning their pup’s ears.

There is a relationship between alleles for behavior and floppy ears.

Charles Darwin noticed, during his travels, that most domesticated animals develop floppy ears. We can find his research results in 897 pages of “The Variation of Animals and Plants Under Domestication.”

Few examples of this syndrome are increased docility and tameness, changes in coat color, reductions in tooth and scull size, changes in ear and tail form (e.g., floppy ears and curly tail), prolongation of juvenile behavior, and reductions in total brain size.

For this experiment, he was picking only the tamest foxes from the litter. After the 6th generation, the first fox pup with floppy ears was born. Scientists also noticed significant behavioral changes: the foxes started to wag their tails when scientists approached and whined when scientists departed.

T.S.A. did small research of their own, but maybe not of the same caliber. They asked society how they react to dogs with pointy and floppy ears.

They found that passengers’ acceptance of floppy ear dogs is much better than those with pointy ears. Now 70% of T.S.A’s dog force is floppy-eared dogs.

Do dogs with floppy ears hear as well?

No matter if the dog’s ears are floppy or pointy, there are still 18 different muscles that regulate the ear’s location. However, a floppy ear’s weight prevents it from searching the horizon like a radar dish, but each form of ear goes through the same set of motions.

The pointy ear is similar to a natural ear trumpet in appearance. A pointed ear emphasizes sound in the same way that we cup our hands over our ears to hear more clearly.

This trumpet operates by gathering sound waves and bouncing them down into the ear canal, where they can be processed. As a result, hunting dogs with drop-ears, such as the Beagle, Bassett Hound, or Bloodhound, are less able to hear than dogs with pointed ears.

But keep in mind that, even with those drop-ears, the canine ear is still much more sensitive than the human ear. Dogs can not only hear much quieter sounds, but they can also hear a broader range of sounds and sense them from further away than we can.

Do wild dogs have floppy ears?

Do you know that the elephant is the only wild animal with naturally floppy ears? There are no floppy ears on wolves or wild dogs (such as Australian dingoes); they all have ears that stand up independently.

The wolf’s hearing is the second most acute of his senses. Wolves can hear up to ten miles in the open and six miles in the forest. Wolves have a hearing range of up to 25 kHz. Some researchers believe that the maximum frequency detected by wolves is higher, possibly up to 80 kHz, and that wolves’ hearing is superior to that of dogs, according to some naturalists.

For wild dogs, like coyotes, jackals, and wolves, floppy ears are not a good thing since the ear flap hanging down will cover the auditory canal entrance. In other words, that floppy ear blocks some of the incoming sound making the ability to detect faint noises more difficult.

Are floppy ears dominant or recessive?

There is a debate whether there is such a thing as a “floppy ear gene.” Due to their form, stiffness, thickness, and height, the ears may be upright or floppy, and this is most likely due to many genes and modifiers.

Your hunting dog’s floppy ear trait does not seem to have only two options: recessive or dominant, but polygenetic. This could explain the wide range of ear sizes. It’s not just about being completely upright or elongated.

Suppose, for instance, you want to breed pointy and floppy-eared hunting dogs with each other. In that case, the potential differences you can get in their offspring depend on whether the pointy-eared dog is homozygous for its pointed ears or heterozygous and what ears styles each parent has.

An oversight of hunting breeds with floppy ears

You are probably familiar with many hunting dogs with floppy ears. The best-known group would be hounds. Their long paper-thin ears almost reach the ground when they sniff around for trail.

Another famous and prevalent group of hunting dogs are retrievers. They are home-friendly and very versatile. Everyone knows the thick and soft floppy ears of Golden Retriever.

Next on the list are pointers— high-energy dogs, best for upland hunting. The variety of breeds in the group range from the Bracco Italiano through Vizsla to German Shorthaired Pointer has differently shaped ears but all floppy.

The majority of hunting dog breeds possess floppy ears, but to name them all would take quite a long time.

For some reason, you may not be a fan of floppy-eared dogs, but you still want to have a companion to take out when you go hunting for your food in the forest.

We have good news for you. There are few breeds of hunting dogs that have pointy ears for you to choose from.

The most popular pointy-eared hunting dogs are terriers. Some notable terriers for hunting are the Westie (West Highland White Terrier), who was bred from brown to white color after a considerable time, and his close cousin the Norwich Terrier. Both breeds were created to get rid of rats and other furry vermin.

The smaller versions of the latter, Portuguese Podengo Pequeno and Medio, are also hunting breeds for smaller game like rabbits and hares.

And last but not least, an African hunting dog, Basenji, a very cat-like dog with strong prey drive.

As Chessie owners, we spend a lot of time by the water. It’s only natural since it’s a retriever, and she loves to swim. The problem arises when she’s diving, and the water gets into her ears. Because of her floppy ears, she can get few issues, like an ear infection.

It is because floppy ears collect moisture and limit airflow to the ear, creating the ideal atmosphere for bacterias to survive and develop in your dog’s ear canal.

There is a simple solution to prevent an infection. Each time after a hunt or recreational swimming outing, you should clean the floppy ears of your dog.

How to maintain ear health

Dogs with floppy ears are at risk for ear infections since those lovable floppy ear flaps will keep your dog’s ears from air-drying after a bath or swimming. So if your dog has floppy ears, take extra-special care to ensure they are dried out as soon as possible!

You can avoid ear infections by putting cotton balls in your dog’s ears (pre-swim and certainly pre-bath), so after a swim or bath, make sure to dry out the insides of their ears as thoroughly as possible with a towel or more cotton balls. Never use q-tips on their fragile eardrums because it’s far too easy to puncture them.

It’s time to call the vet if your dog starts shaking his head repeatedly or without apparent cause, starts scratching at his ears, or if you find any redness around his ears.

Ear infections in dogs are simple to treat (just as they are in humans), but they can spread deep into the ear canal and cause immense pain if left untreated.

Hunting dogs’ floppy ears are a result of domestication.

Years of studies and experiments have revealed that humans bred only the tamest of dogs to have more friendly and obedient hunting buddies.

That led to some unpredictable changes in our four-legged friends’ bodies, like, i.e., lighter color of their coats, smaller jaws and teeth, curved tails, and floppy ears.

There are some perceived benefits from the floppy ears, such as scent gathering, fewer insect bites, easier movement through cover, and looking less aggressive.

While none of these were intended, they are still great benefits to the dog.