Catch and release fishing is one of the biggest controversies in the fishing world. Many people believe that it is one of the very few practices that keep the fish numbers from teetering while still enjoying the fishing.

Others think catching and releasing is cruel and kills the fish regardless. The fish mortality would be the biggest argument here. Recent studies show that most caught and released fish have big chances of survival.

What Percentage of Fish Survive Catch and Release?

Depending on the type of fish and how it has been caught, there are different numbers of fish surviving catch and release. The average survival rate of catch and release fish is between 84 – 98%.

For starters, some fish are stronger, more resilient than others, and less prone to stress. Tarpon, bonefish, snook, and spotted sea trout have the biggest survival rate amongst studied fish. The fish hooked by their lips has better chances of survival than gut or gill-hooked fish.

This, in turn, can disrupt the fish’s metabolism. It greatly lowers the chances of survival of the fish. In fact, stress is the most common cause of death in caught and released fish.

How Much Does Catch and Release Hurt Fish?

For many years, people believed that fish didn’t feel pain. However, studies showed that, although fish doesn’t respond in the same way as humans, they can feel pain to a certain degree.

The fish fighting while hooked previously believed to be an automatic response is, in fact, a response to pain. There are pain receptor neurons called nociceptors located around a fish’s body.

Although nobody can say for sure how much exactly a fish is hurting while being hooked and dragged out of the water, scientists found that fish can feel enough pain to slow their movement, cease social interactions, and limit food intake.

Do Fish Heal After Being Hooked?

Yes, fish can heal after being hooked, providing the wound is not too big.

Fish, like other animals, can heal their small wounds pretty fast. Although infection is a risk and can hinder the healing or, in extreme cases, even kill the fish, the risk is smaller due to the slimy coat covering the fish.

The slime protects the fish from bacteria, greatly reducing the chances of infection.

While any minor injury to the mouth can heal rather fast, internal injuries from swallowing the hook are a different matter.

While injuries in the muscle tissue usually heal rather well and relatively fast, an injury to the stomach, heart, liver, or gills is less likely to heal properly, if at all.

How To Safely Release Fish?

Careful handling of fish is important regardless of whether we plan to keep or release the fish, although handling is even more critical in the latter case.

Ensure you always use the proper sized tackle for fishing. If the fish you pull in is repeatedly tired, you should change the tackle to a heavier one. 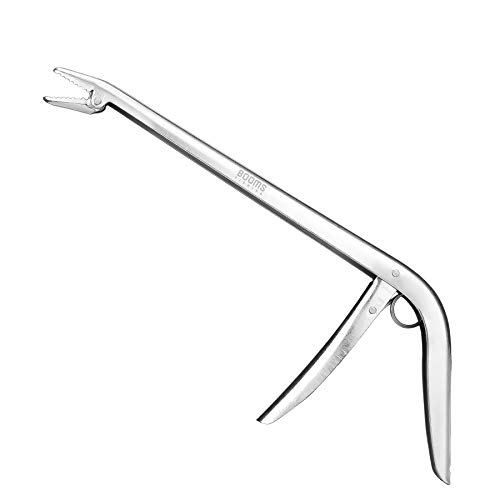 Prices pulled from the Amazon Product Advertising API on:

Product prices and availability are accurate as of the date/time indicated and are subject to change. Any price and availability information displayed on [relevant Amazon Site(s), as applicable] at the time of purchase will apply to the purchase of this product.

Fishing is a great sport, even if you don’t intend on eating the fish you catch. Catch and release practices are a debate between anglers but also between non-fishing people.

Although many people think catch and release is a cruel sport, it doesn’t affect nature if performed with care and respect for the fish. In fact, releasing caught fish ensures that there are enough specimens left in their habitat to promote the breeding and survival of the species.