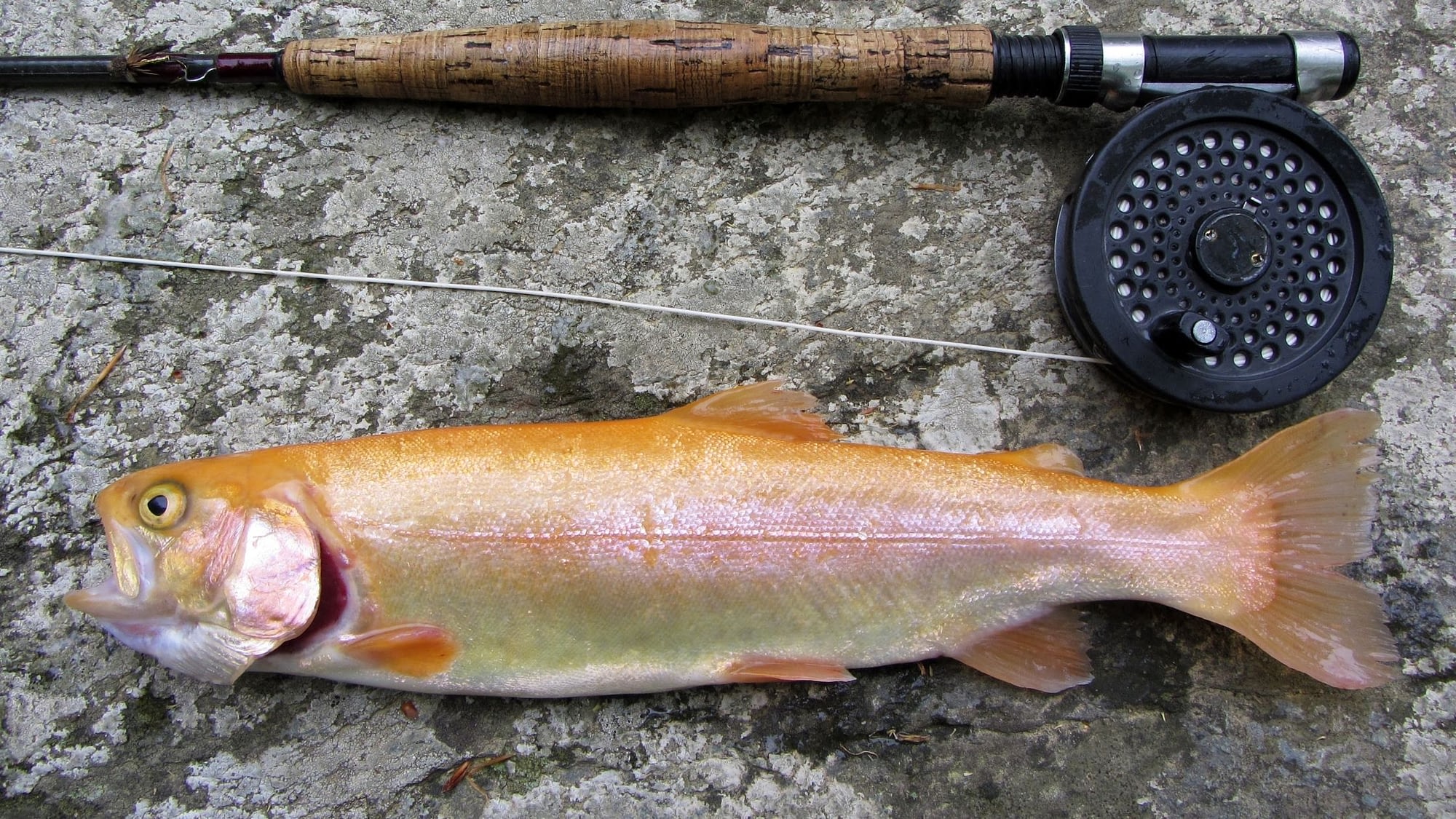 Anglers of all levels can appreciate a good day on the water fishing for trout. There are around 50 trout species currently recognized, with these freshwater fish found in cool lakes and clear streams across North America, Europe, and northern Asia.

One unique trout variety you may enjoy fishing for is Palomino trout, but you can’t find them just anywhere. Here’s what you need to know about this eye-catching hybrid and where to fish for them.

What Is a Palomino Trout?

Often called “bananas” or “lightning” trout, Palomino trout appear almost albino in color with very light, golden scales. They are usually slightly more yellow and golden on top and get lighter toward the bottom, with a very pale yellow-white belly. Some have a more vibrant yellow color than others with a more noticeable red side stripe. Palomino trout do not have spots on their pink fins or golden bodies.

Is a Palomino Trout the Same As a Golden Trout?

Palomino trout are not the same as a West Virginia Golden trout, but rather a mix between Golden and Rainbow trout. Palomino trout can reproduce although the success rate is not widely known, unlike tiger trout, another local hybrid species that cannot reproduce.

Palomino trout are sometimes confused with the Golden trout native to California. They grow to be about the same size as standard Rainbow trout, but they can get even larger. Their growth process is also faster as a hybrid. Mature Palomino trout reach 12-30 inches long and can weigh between 2 and 10 pounds. The Pennsylvania state record belongs to a 13-pound Palomino.

As a hybrid, Palomino trout are not natural due to their cross-breeding origins between the West Virginia Golden trout and Rainbow trout. The artificially-bred variety has become a popular hatchery fish in the Appalachian region. Palomino trout were stocked in local lakes and streams as their population grew, and they have become trophy fish for local anglers.

Palomino trout are very similar to West Virginia Golden trout and are often mistaken for them. Some anglers may find their color to seem almost unnatural or unhealthy with the bright golden scales, but they are a healthy species that has continued to grow over the past 60 years since they were first introduced.

Palomino trout are definitely rarer than other types of trout. They are primarily found in select lakes, streams, and hatcheries in Pennsylvania, Virginia, West Virginia, and Maryland. If you find a stocked fishing spot in these states, you have a chance of hooking a Palomino, but they aren’t widely available elsewhere due to their hybrid origins.

Unlike brown, brook, and rainbow trout, Palomino trout are not nearly as common, making them an exciting and somewhat elusive catch. Their remarkable color makes them a desirable catch for a lot of anglers, but there just aren’t enough of them to go around. You can notice Palomino trout more easily than other fish that blend in with the water.

When it comes to fishing for rare Palomino trout, the saying “early bird gets the worm” holds true. If you can beat other fishing groups to a Palomino hotspot, you have a better chance of hooking one before they become skittish and even harder to catch. Also, these fish adapt quickly to their surroundings especially with their bright color, so even though they are easy to spot near the surface, they aren’t always a quick and easy catch.

Where Did the Palomino Trout Originate?

The successful Palomino trout breeding program took place at a state hatchery in West Virginia, where a single female Rainbow trout was discovered with the random genetic mutation that produced her standout gold coloring.

After the golden female and the regular Rainbow trout were bred, the gold hybrid was introduced into West Virginia’s Rainbow trout stock. It was referred to as the state’s Centennial Golden Trout when it was first revealed in the spring of 1963.

Pennsylvania hatcheries caught on to the hype and also produced the Palomino trout, so this variety has been circulated in area lakes and streams since the mid-1960s. The Palomino population has fluctuated over the years, and it remains an intriguing and in-demand fish to catch for both resident anglers and visitors alike.

Palomino trout are considered fast water fish that prefer swift streams, creeks, and rivers. They are usually found in areas with more shade, presumably due to their bright color.

Like other lake and stream trout, Palomino trout eat minnows, aquatic insects, crayfish, crustaceans, and smaller fish. These bright yellow trout are most actively searching for food during the early morning hours and sunset, making the start or end of the day the best time to fish for Palomino trout.

When fishing for Palomino trout, keep in mind they have been known to eat nightcrawlers, mealy worms, crickets, and salmon eggs. As a trophy fish that can take some time to catch, patience is key no matter what bait you’re using.

Lures that resemble Palomino food sources will give you the best chance of success out on the water, especially if you choose different bait from your fellow anglers. The more variety, the more likely you are to attract Palomino trout.

How Do You Catch Palomino Trout?

Not everyone catches Palomino trout on the first try. This is a relatively rare species, and you have to be in the right fishing spot to start. Check out local Pennsylvania or West Virginia lakes to see if Palomino trout are stocked there, otherwise, you may be coming up empty.

A slow and steady hatchery distribution program means a few other regions may have one or two spots with Palominos, but you have to do your research first. Also, remember that spring is the prime time for Palomino trout, so plan accordingly.

Many anglers report they have more success after trying a few different types of bait. If you can bring salmon eggs and live worms, as well as a few bright lures, you have more options to try and catch these sometimes stubborn fish. Palomino trout are generally shy and like to hang out in deeper water, so make sure you have lures that can sink at least a few feet.

While heavy-weighted bait and lures are known to capture this trout’s attention, lightweight lures are also worth a try. The shy and highly observant Palomino may be overwhelmed if there are too many heavy lures in the water, which is when they swim closer to the surface.

You may even catch a glimpse of their popping color, and a lightweight floating lure could mean the difference between reeling in your desired catch and going home empty-handed.

Can You Eat Palomino Trout?

The good thing about fishing for Palomino trout is that you can eat them. They taste like a Rainbow trout, although their meat may be slightly pinker or more orange. Freshly-caught Palomino has an optimal flavor with the key health benefits of fish consumption, such as calcium, potassium, magnesium, and omega-3 fatty acids.

Like other fish, Palomino trout also offer their fair share of Vitamin D and riboflavin. While their amazing color makes some anglers hesitant to eat them, Palomino trout are perfectly safe and taste best when lightly grilled with a hint of garlic and lemon. Wine broth, mushrooms, asparagus, and tomatoes are other popular accompaniments when cooking Palomino trout.

If you’ve ever prepared Rainbow or Golden trout, you can follow the same recipe with Palomino trout for a flavorful fish meal that takes just minutes to make.

Palomino trout are bright and colorful fish that you may find on the end of your fishing line in lakes and streams throughout Pennsylvania, Virginia, West Virginia, and Maryland.

As a hybrid between Rainbow and West Virginia Golden trout, Palomino trout have an extremely light yellow-golden color that you can’t miss. Although they are rarer than standard brown and Rainbow trout, they are trophy fish that’s worth the wait, whether fishing for recreation or to bring home a tasty meal.