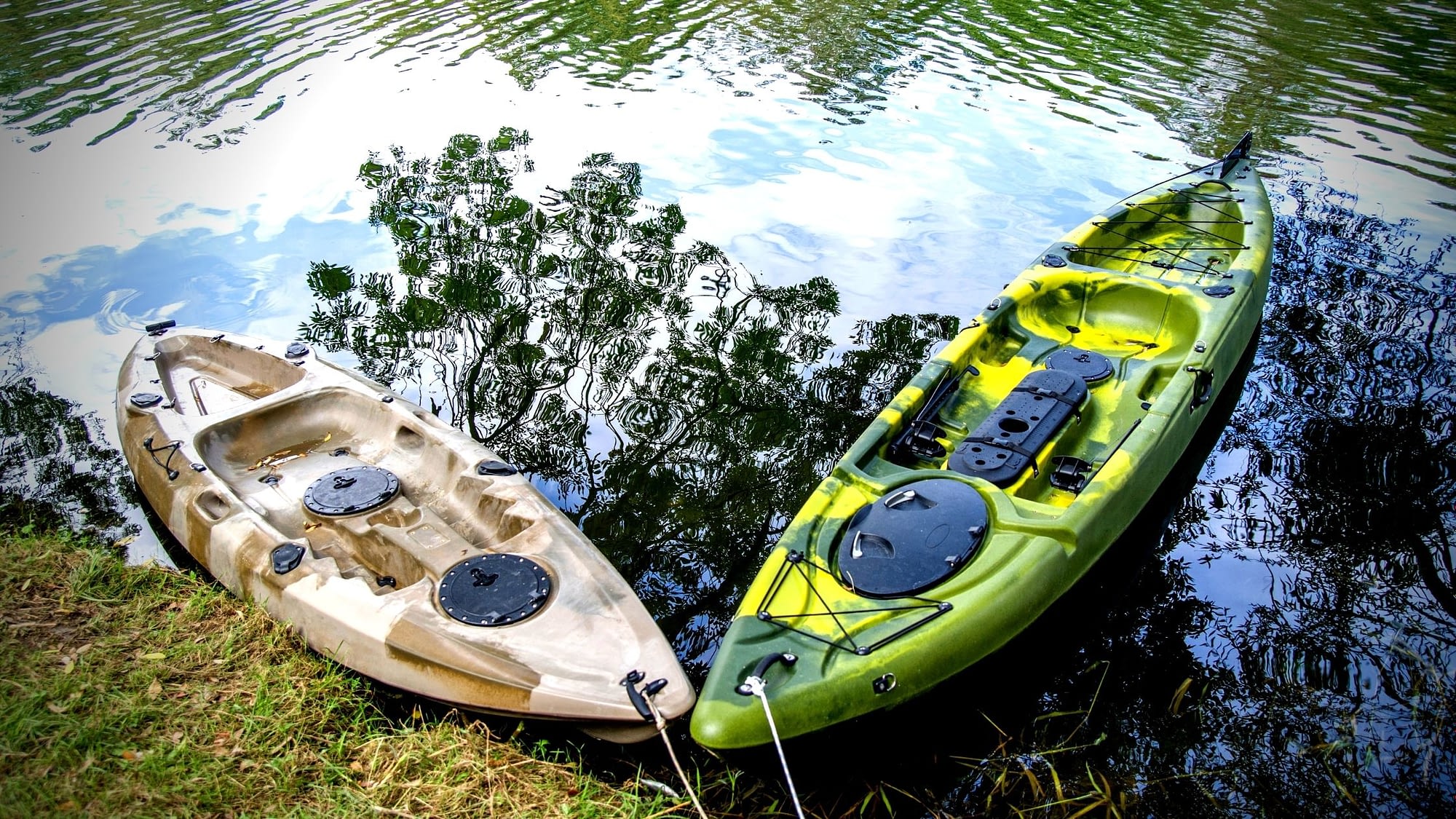 So you’ve got a kayak and a set of paddles. But you’d like to free up your hands by using pedal power.

Or getting a motor on your kayak and zooming across the water.

Do you have to purchase a whole new kayak entirely? Do you take an old bike apart? Do you whip out the duct tape, bungee cords, and rob your lawnmower of its motor?

It’s much easier than that.

Can You Use a Motor On a Kayak

The short answer is yes. But there’s no single method. A popular solution is mounting a trolling motor onto the kayak.

Paddles are nice, but trolling motors have a lot going for them. We all know that daylight doesn’t last nearly as long when you’re out fishing, so getting that trolling motor mounted on your kayak will get you around the waters much faster.

The first step is getting your hands on a mount. There are two ways of going about this. You can opt for an off-the-shelf mount or you can try to make one yourself.

Ready-made mounts are all about convenience. They’re tailored to suit a kayak and they can be put on without a great deal of trouble. Plus they usually look the best and are maximized for hardiness and agility.

Driving and steering the boat gracefully hinges on correct installation. Before you even lay down a dime on a mount, you have some factors to weigh.

The mount needs to be able to absorb the vibration of the trolling motor, otherwise, those vibrations are passed on to your kayak. The more powerful the engine, the more “rough” the ride if the mount can’t properly absorb the shock.

You are not going to have to worry about any severe technical issues if your mount’s components are rust and water-resistant. As usual, you get what you pay for.

Kits are kits. You buy it and it’s your baby. More than likely, the job of installing the mount falls on your shoulders. If you’re not much for the DIY game, it would be prudent to choose a mounting kit that isn’t complicated to install.

Compatibility With Your Kayak

Deviations in compatibility could easily come back to haunt you later, at the cost of the performance of the trolling motor.

Your best bet is to get as much advice as you can from the seller and spend the extra time looking at online reviews to see how others have fared using the mounting kit on their own boats.

Going the homemade route means saving some money. But you’re limited to using existing features and components of your kayak.

If you’ve got a rod holder, you’ve got something to house the mounting poles. Does your kayak have a rear storage compartment? You could manage to squeeze an onboard power source in there like a

Homemade mounts call for creative thinking, like a grandfather with a roll of duct tape fixing his car.

But the requirements for the DIY mount are the same for the off-the-shelf business. It still needs to have a good level of shock absorption, should still be durable, and the mounting still needs to be compatible with the kayak.

Such things call for tools and skills that aren’t always available to everyone, so you might take the time to pay a visit to you favorite mechanic and ask for some assistance, especially if you’re lacking on the tool end.

Electric trolling motors are your most expensive option, but they’re also your safest. They eliminate the need to carry flammables on your kayak. They also prevent said flammables and exhaust substances from contaminating the marine life you’re trying to catch and eat.

The chemical slick you leave behind today will bioaccumulate in fish and could find its way to your dinner table later.

Electric motors are also quiet compared to gas-powered ones. Not to mention that there won’t be any fumes to breathe. You’ll be able to hear your spouse complain just fine.

So what do gas-powered motors have going for them?

The argument used to be raw power. Up until recently, there was no matching the speed of a gas-powered motor. But technology is changing, and battery-powered trolling motors are running faster and longer.

That leaves gas-powered motors with one major selling point: price. You won’t lay down much money if you want a gas-powered trolling motor today. But you – and the environment – will end up paying in other ways over the long term.

So after you choose a motor, how are you going to get it on the kayak?

An Example of installing a Homemade Mount

First things first: deciding where you want to mount the trolling motor on the kayak. It’s not unusual to see the motor mounted off the side of the gunwales. Others mount off of the stern or the bow. In other words, there aren’t many places on your kayak that the trolling motor will not comfortably sit and steer your kayak.

Each of these mounting spots have their pluses and minuses.

If you mount off to the side of your kayak, then the handle is fairly accessible from the cockpit. This is a big boon if it’s one of those motors that can only be controlled by hand.

Yes, there are motors that can be controlled by remote. These are best suited for either the bow or the stern.

The biggest advantage of a remote-controlled motor is that you’re going to have your fishing line a good, safe distance away from the propeller. You can imagine the issues that could cause.

So now you know where you want the motor to go. Now it’s time to choose the right materials for the job. Strength and sturdiness are important, so it’s no wonder that popular materials include wood and PVC piping.

PVC is great just for the simple fact that it is both waterproof and strong. The round shape of the PVC can easily utilize openings that are already cut into the kayak and join the wood further away from the water.

But on the other hand, PVC will never have the raw strength that wood does. That said, a motor with a lot of thrust might call for more extensive use of wood, but this isn’t a hard and fast rule.

In whatever capacity you choose to use wood, make sure that it’s treated wood.

If you go with a PVC pipe, you can add an extra level of strength to your mount by putting rebar inside of each straight section of the pipe.

Obviously, make sure that the mount doesn’t add too much weight to the kayak. You might unwittingly put your kayak’s weight outside of the motor’s range of thrust.

To Drill or Not to Drill

Depending on the kayak you’ve got, it might not be necessary to drill any holes at all. Some of them are made with the expectation that you might want to add a motor.

Get a marker or a pencil so that you can measure distances between holes that you end up having to drill.

Double-check that the holes will be slightly smaller than the screws or bolts that will keep your mount in place. You don’t want any water getting into your kayak through any loosely sealed holes.

From there, drill your holes and make sure that you drill gently and reverse the drill bit out of the hole so as to not damage your kayak. Tight and clean holes are what you want here.

From here, the way you proceed will depend on which side of the kayak you want to mount your motor. We recommend consulting the pictures and steps in this article.

Can I Add Pedals to a Kayak?

Pedal-powered kayaks started appearing on the market. Not everyone would be inclined to lay down the money for a new kayak with a different propulsion system, so it was only a matter of time before someone would start offering aftermarket pedal systems to kayak owners.

Is it possible to completely DIY a pedal drive without buying anything off the shelf? Yes, but that is the topic for a book, not an article. Unless you’re willing to do something as free-wheeling as what’s depicted in this video.

Meanwhile, we’re going to recommend looking into a commercially produced drive that you could install at home.

H2Pro-Ped has made its mark in the kayak world by making a pedal and propeller system that bolts on.

Dave Gater is the owner of the company. In a perfect world, he would be able to design a system that fits every kayak, but the task is a tall order, so they’ve chosen to focus on systems for a few popular kayaks.

“It’s been working out in the end. Customers are designing their own mounts at home.” He plans on making the systems more powerful and wants to make room for electric and solar power.

The good news is you’re not going to have to cut any big openings in your kayak for the current H2Pro-Ped systems. They’re all bolt-on systems that utilize a cable drive that runs the length of your kayak to the stern where the propeller is.

One user discovered that the room you give the cable to run is critical. The rest is deciding the placement of your seat and the drive tower where the pedals are.

This video shows the installation from the point of view of the makers, H2Pro-Ped and their partners at NuCanoe.

Is a Pedal Kayak Worth it?

Speed is of the essence when a kayak is participating in a fishing tournament. The winners are usually the anglers that make it to their fishing spot first. Shortened transit times mean more time spent fishing.

Paddling is excellent on its own… except it requires that you use both of your hands. If you can free up your hands between fishing spots, you can make use of the time that would otherwise be spent waiting. In some cases, that time could be spent fishing as well.

A pedal system frees you up to either catch more fish or do maintenance on all the little things that would help you catch fish when you get to the next spot.

Your Legs Have More Power Than Your Arms

Nobody got in shape for winning a Mr. Olympia competition while fishing. If your doctor has been wanting you to get in some kind of exercise routine, the leg power required to push your boat through the water across distances just might be the ticket. Most of the time, our legs are stronger and have more endurance than our arms.

Paddling also takes work to develop a proper technique and rhythm. Pedaling? It’s just like riding a bicycle, quite literally. Folks new to kayaking will take to pedaling much more gracefully.

Both methods won’t go anywhere, but the gap between them is ever-narrowing. Manufacturers are paying attention and will cater to both sides to make as much money as possible. This means future options for people who want to pedal.

Most of your options involve making a purchase if you want to put the paddles down in favor of either pedals or motors. Only the most committed DIY lovers will be able to avoid a trip to the hardware store. But mounting pedals and motors on a kayak are perfectly possible.

Whatever you decide, be safe and have fun.