Backcountry hunting or fishing is one of the most exciting adventures you can partake in, and like any remote adventure, it requires certain gear.

Amongst that gear should be a solid camp or hiking stove.

I’ve recently got my hands on the Fire Maple Star X2 and decided to try it out on my mountain stream fishing trip.

I’ll be honest, I had my hands on a Jetboil and was just checking out when the lady ringing it through asked me, “did I see the Fire Maple Star X2?”

After she brought the stove over to me, I became quickly interested due to the extremely favorable price tag.

However, I have an issue where I do not like to purchase cheap poor quality products. So, I opened it up there and then in the store to see how it stands up to superior products like the Jetboil, which was also right in front of me.

At first, I was quite impressed with the Fire Maple Star X2. It was very similar to the Jetboil. It was larger but not very heavy.

Overall it looked like a very solid product, complete with stovetop for a pan, and a carry bag.

With the new stove purchased, I was eager to try it out and couldn’t wait until I got to the mountains, so I decided to try it out while packing for the trip.

I filled the jug with 1 liter of water to see how long it took and was pleasantly surprised to see it took only 3 minutes to bring cold water to a boil.

Hiking with the fire maple was effortless. It was a bit bulky for mountain flyfishing, but considering I didn’t have much in my fishing backpack, it was a none issue.

However, if you are backcountry hunting, it might be a tight squeeze.

Weight was not an issue as it only weighs 600g, but still a little on the heavier side.

The first trout I caught was a bit small to cook up, but the second was perfect.

Back to camp I go, with a beautiful brown trout, and so happy I chose the Fire Maple Star X2 because I also brought the cast iron pan.

To say I was impressed how the Fire Maple Star X2 handled the cast Iron pan would be an understatement. I was blown away.

It heated the pan with such vigor like it had something to prove, and it proved it.

Before long, the fish was on the pan and cooking away nicely, never once dropping temperature.

The stand stayed as steady as it could on the ground, it was a little bit wobbly but given the weight of the pan and the uneven ground I think it did a fair job.

Many more times, I used to pan on the side of the bank or in the woods to heat water, and it performed faultlessly.

One great feature of the Fire Maple Star X2 is the simmer control. This feature alone puts it ahead of some premium brands for me. I’m sure, like many of you, I love cooking in the wild.

Some fresh heart, or fish, and suddenly, you find yourself making a gourmet meal in the wilderness. The simmer control on the Fire Maple X2 will support you in letting out your creative culinary genius.

To heat 1 liter to water to a soft boil took 2 mins and 50 secs; a rolling boil took 3 mins and 47 seconds outside with a six mph wind.

To cool down after use, it took 2 mins and 35 seconds with the air temperature at 70 degrees.

After the first impressions, which left a good impression on me, I wondered how the Fire Maple stove would hold up to a backcountry fishing trip.

The size of this stove had me a little concerned. It measures 133mm x 205mm, which is a little bigger than a Jetboil stove, although the height is only 170mm with the lid off.

The design of the Fire Maple X2 was clever in the fact that it can carry everything inside its pot, including the gas canister. This makes up for its larger size and also allows you to boil more water.

The quality of the pot is pretty solid. It features a crafty handle that holds the lid closed with a wire cable.

When the handle is flipped open, it locks securely into place, allowing to lift the pot with ease.

The lid has a nice silicone attachment that doesn’t get hot, so you can easily check on the contents of the pot when you are cooking.

The flame control and the Piezo igniter worked flawlessly, and it honestly impressed me once again, considering how budget-friendly the Fire Maple X2 is.

I really like this Fire Maple X2. It looks like and feels like more premium-priced stuff. It’s durable and effortlessly endured a 3-day backcountry flyfishing trip.

The only drawback of the Fire Maple X2 is that it doesn’t perform quite as well as other premium brands at speed.

It takes the Fire Maple a little longer to bring water to a boil.

If you don’t mind waiting an extra few seconds, the Fire Maple is worth considering. 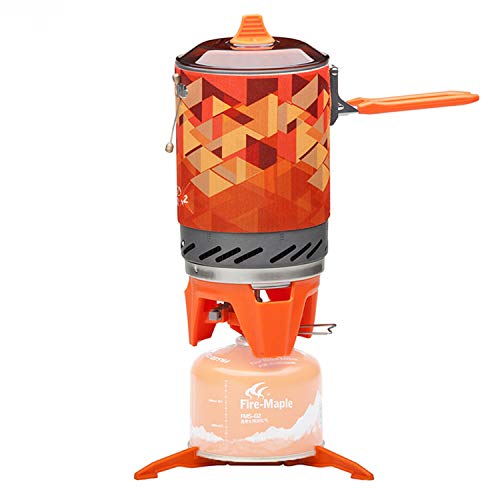