Kool-Aid attracted kids for generations, can it really attract whitetail deer too? The answer is that deer will move in on anything sweet, or salty for that matter. Kool-Aid made into a “deer bomb” is very effective if you use the right flavors in attracting whitetails.

What Are Deer Attractants?

Deer attractants are anything that will bring deer into an area. It is commonly called baiting and isn’t legal in every state. You should carefully check the game regulations for your state before concocting this sweet tasting attractant.

Baiting game is as old as hunting itself.

Deer will move in on apples spread on the ground, plums, cabbage, and many other common orchard and garden varieties of vegetables and fruit. They’re also attracted to salt. That’s why Native American deer hunters often set up blinds near salt springs or natural salt deposits.

Deer are commonly seen on farms and ranches across the country licking salt blocks or molasses blocks that farmers and ranchers use to supplement minerals into their livestock. The deer don’t care if the molasses or salt was meant for cattle, it’s very tasty to them.

A Kool-Aid bomb works the same way as natural bait or those agricultural blocks. It provides a fruity aroma that attracts the deer and the reward of a sweet taste of sugar once the deer follow the smell.

It works throughout the year, but many hunters start to use deer bombs a few weeks before the season opens.

How Do You Make a Deer Bomb With Kool-Aid?

Believe it or not, deer have flavor preferences when it comes to Kool-Aid. Just like the kid who only wants strawberry Kool-Aid, deer have the same impulses. The best Kool-Aid flavor for eastern whitetails is grape or cherry. 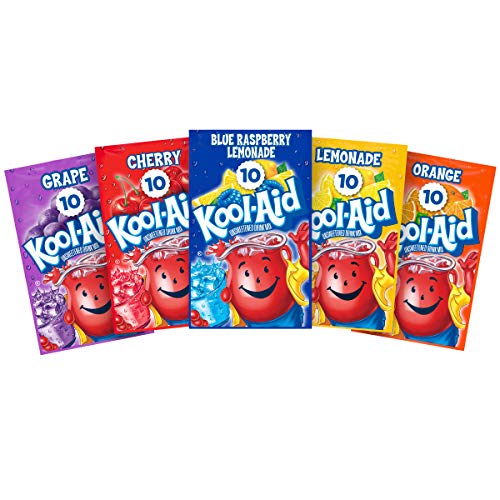 Grapes and cherries are common in vineyards and orchards across the Northeast from Maine to the Great Lakes. Food scientists have devoted thousands of hours of research to find just the right chemical configuration that produces a natural fruit smell.

Deer can’t distinguish whether that grape scent on the air is from ripe Concord grapes lying on the ground, or from an artificial source. They’ll be just as inquisitive with cherry-flavored Kool-Aid.

Deer don’t like the citrus smell of lemonade, lime, or orange. Unless you’re hunting in Florida, California, or Hawaii, these flavors of Kool-Aid will repel, rather than attract deer.

Mix all the dry ingredients thoroughly in a large mixing bowl. When the deer bomb ingredients are completely mixed, pour the contents into a paper bag.

Close the end of the paper bag and shake the ingredients for another 30 seconds vigorously.

Either staple or tape the bag shut.

Your deer bomb is ready to deploy. With any aromatic substance, it will evaporate or vent over time. It is best to prepare the deer bomb just a few days before you’re going to deploy it in the field.

How Do You Use a Deer Bomb?

This is the big difference between the how and why questions in attracting deer. You’ve learned the first how in preparing the deer bomb, now comes the second in how to use it. The why will be answered after the deployment.

Locate an area you will have a license to hunt. It is best if you know the area well before tossing the bomb. If you use a tree stand you should assemble the tree stand with a clear line of sight towards the proposed area of spreading out the deer bomb.

Once the site is selected, the tree stand is in place and you’re sure you have a clear line of sight to an open area its time to drop the bomb.

There are two techniques that hunters use. The first is to just drop the paper sack in an open area and walk away. Make sure there are no staples or plastic on the bag when you set it down. Just leave it for the deer to discover, they’ll make short work of that paper bag.

The other method is to pour the deer bomb contents in a large, conical pile at the best location for a shot when the season opens.

A third method is to make several smaller conical piles. The idea is it will bring in additional deer.

All three methods will attract any deer within range as the scent catches the wind.

If you live in an area with high winds, the multiple smaller piles make sense, the low profile won’t let them blow away. If the area is dry and doesn’t get much wind, the large pile will always work.

If there is an occasional rain shower, leave the contents in the bag. It will still produce an aroma, the bag will add a layer of protection against the elements, and the deer will still smell it. A wet bag is just easier for them to tear apart, and the contents will be dry in the middle unless it’s a prolonged rainstorm.

Should I Set Up a Game Camera to See if the Deer Bomb is Working?

Watching the antics of deer in a feeding frenzy on these Kool-Aid bombs provides some quality entertainment. It’s like a hidden camera at a party. The deer lose their usual calm, careful demeanor when they discover the fruit-flavored mix of powdered sugar and salt.

Deer naturally follow fruit in the fall and they love salt year-round. Sweet corn is often raided by marauding deer, apples are pulled from trees, cabbage out of the ground, and even tomatoes are not safe from nighttime whitetail raids.

Deer are smart enough to know when a tomato is ripe, they’ll never pull a green one off the vine, but at times they’ll pull up the entire tomato plant, eat the ripe fruit and leave the green ones.

I find the deer bomb mentioned above is one of the best ways to attract deer using kool-aid. However, if you prefer to use the kool-aid as is it’s still a very good attractant.

Some homemade tests with a game camera and two piles of feed show 90% of deer and other animals prefer the pile with kool-aid.

I like to mix the kool-aid with some corn. I make a pile of deer corn and sprinkle over a good amount of kool-aid. I find it stands up to weather well and even light rain. The does wash it into the ground but the scent and flavor still remain there for a few days.

The great thing about using it as is, is that it’s fast, doesn’t require preparation, and can be topped up easily.

Deer attractants work. They’ve worked since the dawn of time. People have used corn, apples, cherries, and salt in a variety of ways to bring deer into an area near a hunting blind or deer stand.

Taking common ingredients found in most homes and mixing them into a viable, attractive combination that deer love is an easy process.

Powdered sugar brings the sweetness deer crave as the winter approaches. Sugar is sugar, whether from an apple, a cob of sweet corn, or manufactured sugar.

Deer also crave salt. When it’s available on the ground, they’ll eat it.

Salt and sugar don’t have long-distance aromas attached to them, Kool-Aid does, its been engineered to smell good from a distance.

This engineering that attracts a seven-year-old to a bright purple pitcher of grape Kool-Aid will do the same thing with a herd of deer.

Getting the deer on the Kool-Aid bomb is the first step, using it correctly when the season opens is up to the skill of the hunter.

If you don’t have kool-Aid or prefer to try something else, you can also make a deer attractant with jello