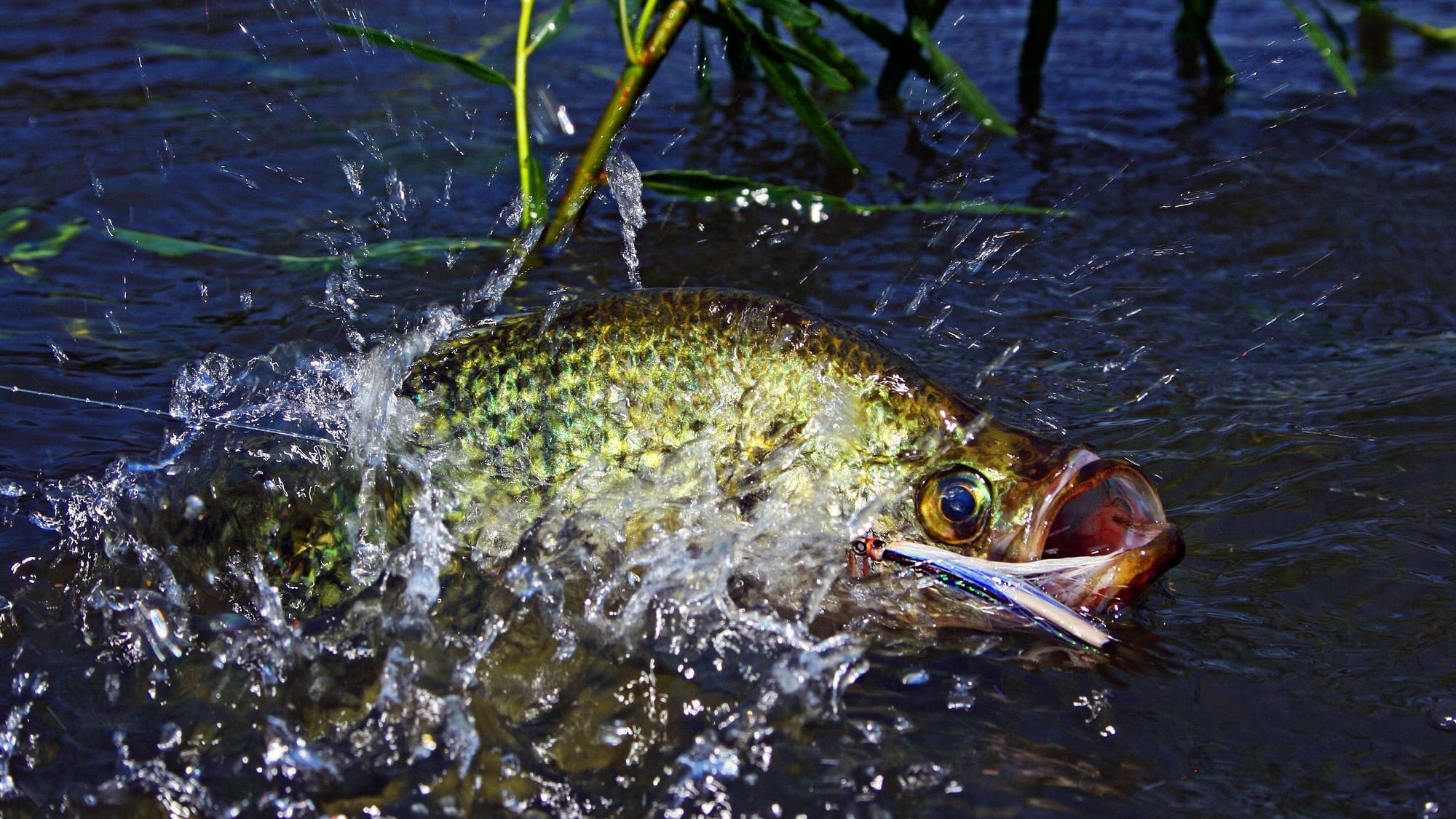 One of the most sought-after gamefish in North America is the Crappie. Also known as Croppie, papermouth, or speckled bass. They’re not too big, and on light tackle, can put up a decent fight. So, what is it about these fish that draws anglers in?

Why are They so Popular?

First off, they can be found in pockets all across the US. With a strong population in the middle of the country. The vast range and conditions they live in make them great for stocking local ponds, lakes, rivers, or private water bodies. This gives anglers plenty of chances to go out and catch these fish.

They don’t get too big but can put a solid fight for a fish of their size. This is especially true while using light tackle. Accidentally catching one on a largemouth bass set up might not be too fun, but catching them on light line and small rods and reels can be a blast.

Crappie can also be caught year-round. Summer, Spring, Fall, Winter, it doesn’t matter. These fish can be caught through the ice during the coldest day in winter, or they can be caught deep during the dog days of summer. So, if you’re itching to fish then chances are you can at least go out and catch a couple of Crappie.

These fish usually appear in strong numbers in their native waters or where they were stocked. Usually, the limit on these fish is enough to feed a couple of people for dinner. This is why most Crappie anglers go out fishing together to increase the numbers they can retain.

Since we’re talking about retaining fish, let’s talk about how tasty Crappie can be. Despite the name, these might be some of the best tasting freshwater fish out there. Their meat is white, flaky, and mild, which allows it to take on the flavor of the seasoning or breading.

How to Catch Them

If the reasons above get you excited to go out and chase some Crappie, check out below. We’re going to go over in more detail about how to catch these fish and how to locate them in different bodies of water.

One of the most popular ways to catch these fish is to use an artificial lure called a jig. There are probably thousands of different weight, color, and style combinations out there. So, we’re going to give you a handful that should are consistently the best colors and weights to use.

If there is only one size you have in your tackle box, let it be a 1/32-ounce. I find that this is the size that will work the best in most conditions. Once you get comfortable using this size, then you can move up or down and figure out which sizes work best. Even then, you’ll find that 1/32 will be the most consistent.

For jig style, you should be using either a tube or a curly tailed jig. These cover a wide range of forage for Crappie, and similar to the weight we touched on above, this is one of the most consistent styles out there. These are also really easy to take on and off the jig head and come in an abundance of colors.

Speaking of colors, you should start with just a handful of different ones before moving on to the more colorful or elaborate patterns. White, black, brown, green, and chartreuse are great spots to start. Get comfortable with these and then you can move on to different colors.

We all got started fishing using live bait, and for a good reason. It’s because it flat out works. Worms, crickets, beetles, shiners, or any other small live bait you can get your hands on are going to work well when fishing for Crappie. This is especially true if you find the bite to be tough and they’re not hitting lures.

In some locations, it can be kind of a pain to find somewhere that has adequate live bait. However, if bait shops are scarce in your area, Walmart and other large sporting goods stores usually have at least nightcrawlers in stock. Those will probably need to be either quartered or halved though. So be prepared for worm guts.

Where to Find Them

Winter and Summer, you’ll be finding Crappie in deeper water. Usually, they are holding near cover. So, it’s best to use some type of Sonar to help you locate them. Locating them blindly will result in a long day out on the water.

Fall can be difficult because Crappie are all over the place. Shallow, deep, medium depths. Sonar can help you locate where they might be. It will be different from day to day, so don’t get discouraged if you found them one day and the next, they’re gone.

In Spring they will be up shallow getting ready for the spawn. They can be caught either moving to their beds, on their beds, or leaving them. Ideally, you would want to avoid fishing this time of the year as retaining fish or catching them during the spawn could negatively affect their young from hatching.

What Kind of Equipment to Use?

Just about any type of rod and reel will work when Crappie fishing. A spinning rod and reel will be the most effective though, as it can handle the light line and light lures better than other reels. These are also easy to use, so beginners can easily cast them without too much of a learning curve.

As long as the rod and reel are “Light” or “Ultra-light” then the size of the rod shouldn’t matter too much when jigging or using live bait. A nice, short rod would be ideal because it is easy to move around and could lead to fewer accidents.

Lighter line will help give the lure or bait a more life-like presentation. If you’re using a heavy jig or live bait, then you could get away with six-pound test. However, four-pound will be the ideal size. Anything lower and you’ll have to really play the fish to get it in as it could break easily.

Jigging and live bait are going to be the best way possible to catch Crappie. However, if you don’t want to do that, you could try out the methods below. These may require different equipment than the methods above.

During the fall, moving lures such as crankbaits or spinnerbaits could be a great way to locate Crappie. Since they won’t be in one consistent spot, you can try shallow and deep. Since the lure will be moving you will spend less time in each spot and more time trying to find where these are.

Moving lures are especially useful when the water is muddy or off-colored. The rattle of a crankbait or a spinnerbait could help the fish hone in on your lure and could lead to more bites. Since jigs are usually quiet, they can have trouble catching fish in low light conditions.

This is a technique used by the most serious of Crappie anglers. You have rod holders set up around your boat. Off of each rod you have some sort of curly tailed jig, spinner bait, or whatever else you plan on using that day. From there, you simply troll around the lake looking for fish to hit your lures.

This method can be used in all different weather conditions. The depth of the lure will need to be altered as in winter and summer Crappie will be deep where fall and spring could find fish in all different water depths. So, having multiple lures in the water could help you key in on exactly where the fish are sitting.

There may be some people who argue this, but in my opinion, Crappie are some of the best tasting freshwater fish out there; On top of that, fileting them is pretty easy and they are hard to screw up when prepared properly. Below, we’re going to quickly go over how to cook and filet these tasty fish.

How to filet Crappie

If you plan on cooking the fish with the skin on, you will need to remove the scales along the side of the fish. This can be done with a tool made specifically for this or by using the back of a spoon or butter knife. If you plan on removing the skin, then skip the first step below.

You can cook a Crappie filet in a number of different ways. However, frying is definitely the most popular and tastiest.

If you want to be a little healthier, then you can Sautee in a pan, bake in the oven, or cook quickly on some aluminum foil on the grill. Feel free to place any type of seasoning you wish. Quick marinades could also work.

Crappie are some of the most popular gamefish in the US, and for good reason. They can be found across the country and can make great table fare, leading to nights spent frying fish with friends and family.

Crappie great fun to catch and can prove to be a challenge for experienced anglers, but can be caught easily enough not to discourage new angler. They are a great in-between fish that anglers of all skill levels can catch.

So, use the article above to help guide you in your journey to catching Crappie. Use some of the tips above, and then once you’re comfortable, feel free to deviate and try some of your own tips and tricks that you may have found!