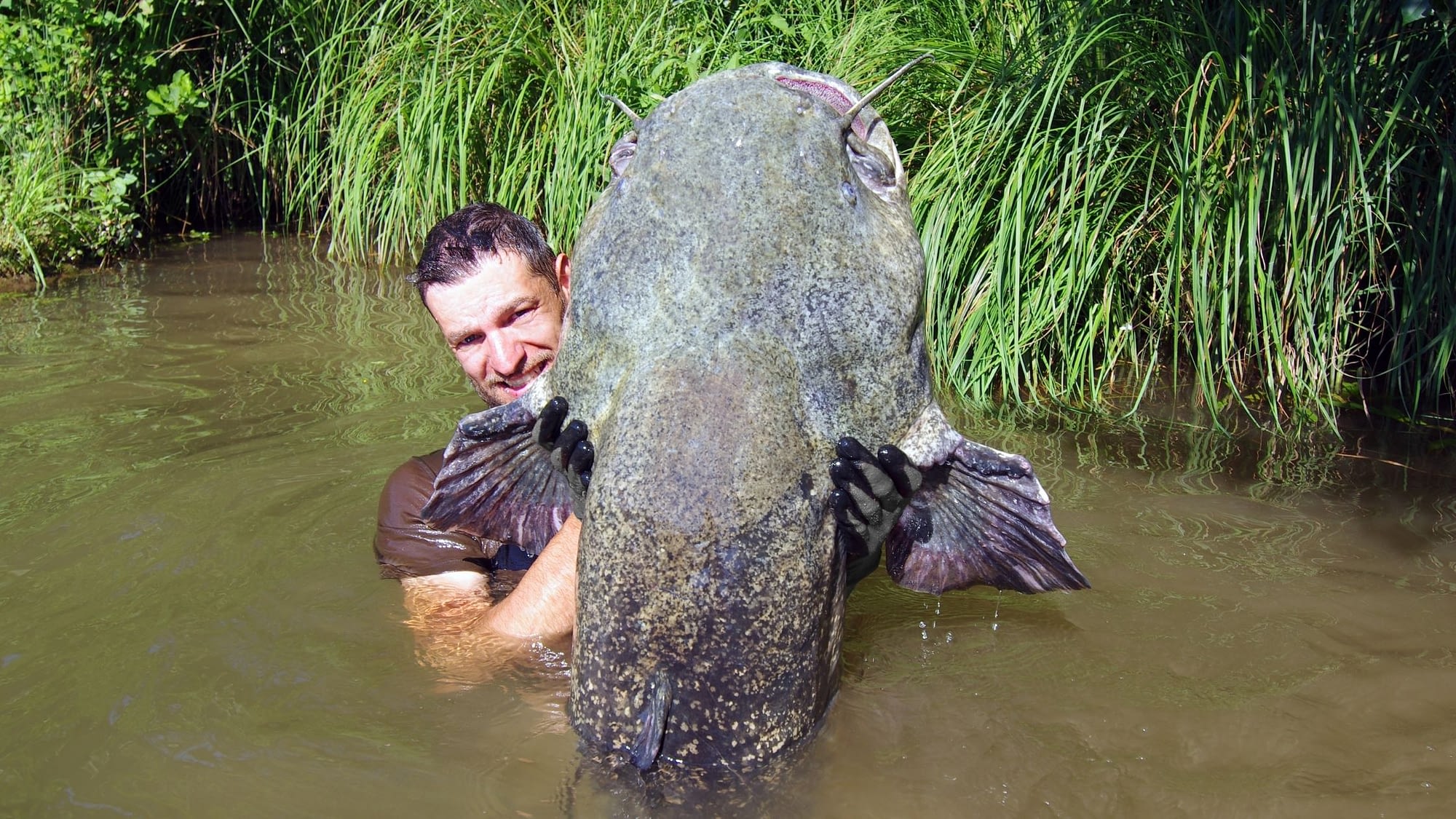 The History of Noodling

Where and when catching catfish this way started is not known. Different people likely discovered it at different times. Catfish are defensive of their nests, so anyone could have found their behavior an easy way to catch them by hand. The term “noodling” is used in the southern United States.

Catfish noodling as a sport is most popular in Oklahoma. The first Okie Noodling Tournament was held there in 2001. Nate Williams won in 2019 with a record-setting 85.05-pound flathead catfish. Because of heavy rain and flooding, he had to use scuba gear to enter the fish’s hole.

Other noodlers practice the sport in many southern states, too. It’s popular in Missouri, Alabama, Arkansas, and elsewhere to a smaller degree. But because of state laws and its danger, the art is passed on in families more than picked up by new hobbyists.

People have caught fish by hand for thousands of years. Trout tickling is similar to noodling and is mentioned by Shakespeare and the Greek writer Oppian. With how easy it is to get food nowadays, these arts are done more for sport.

No gear is necessary, but a poking stick and gloves help. Noodling is done in spring and summer when catfish spawn. Once the water gets to 70 degrees Fahrenheit, they start moving into nests. Nests are made in holes protected from current and predators. These can be tree roots, logs, pipes, clay tunnels, rock crevices, and even tires.

Noodlers wade in the water, feeling for likely nesting spots. A stick might be used to poke inside and feel for a fish. If one is home, they stick their hand in, and the catfish bites down onto it. With two hands holding its bottom lip, or one arm stuck through the gill, the fish is then brought to the surface.

Catfish Noodling is usually done in two-man teams. In shallow water, one will block an escape with their legs while the other dives down. The spotter can also help keep the other steady while wrestling the fish.

The Dangers of Catfish Noodling

The biggest danger of noodling is drowning. Some will dive 10 to 20 feet to reach a catfish nest. A 40-pound fish is on the light end in this sport, and even that can be hard to bring to the surface. Catfish will roll under the water while fighting and can be difficult to let go of.

Loose clothing can get stuck on underwater debris, too, but drowning is not the only risk. Other animals like to live in the same places catfish make their nests. Venomous snakes and snapping turtles are common. Beavers and muskrats are large and have been known to attack catfish noodlers. Alligators are present in southern waters, as well.

Not all noodlers wear gloves, but there is some risk of losing a finger. Blue cats don’t usually get as big as flatheads, but they have a much harder bite. None of these catfish species have teeth able to slice off limbs, but the sandpaper-like mouths can scratch and cause infections. Cuts and bruises are very common in the sport.

As more people have become aware of Catfish noodling, the sport has been both banned and legalized state to state. As of right now, 16 states have legalized it:

There are different rules in each state. A general fishing license is needed in all, but it’s important to know what tools and ways are allowed to noodle in them.

West Virginia only legalized noodling in 2019. Some of their rules are similar to the majority of the others: The season runs from June 15 to August 31; only in daylight and without bait, attractants, spears, or gaffs; a daily creel limit of 4 fish.

Catfish Noodling Banned in Some States

Many states view catfish noodling as a threat to the fish and fishermen. Since fishing for cats is legal everywhere with a rod and reel, bans on noodling seem unfair to some. But besides the risk to people, there is a strong case against it in many fisheries.

In Missouri, it’s a hot topic of debate. Flathead and blue catfish are highly prized game fish there and make a lot of money for the state. A two-year trial run found that noodling negatively impacted those fish’s population, so it was stopped.

Even with catch-and-release practices, catfish can destroy their eggs while a noodler fights with it. All of the eggs will quickly die if the fish is not released. The stress of being caught can also kill a large catfish.

Illegal catfish noodling still takes place in Missouri. Many people there wish the sport were legal, and every year law enforcement writes tickets to those caught doing it. It’s a balancing act in every state between a healthy economy and fisheries, but so far in Missouri, the answer is no.

With all the t.v. shows and talk about the sport recently, people may want to try it but don’t know where to start. Sticking your hand in a dark hole isn’t something you should do without some kind of experience and know-how. Luckily, there’s some help out there.

Most people have heard of fishing guides but might be surprised that there are noodling guides. This side of the fishing sector has grown a lot all over the south USA. A quick search on google will show several professional-grade guide services in almost every noodling state.

The best place for catfish noodling is in the Mississippi River Basin. From Wisconsin to Louisiana, where it exits at the Gulf of Mexico there are huge cats and lots of them. Many of the side creeks and lakes they flow into down south carry monster fish, too. The warm waters year-round make an ideal habitat for them to thrive.

Small creeks tend to have big cats. When the warm rains start falling, it warms up the small bodies of water first. Catfish ready to spawn will be drawn there to start building nests. Shallower water is safer to fish in this style, too.

Any structure will tend to make holes and cover for catfish nests. The supports holding up docks and bridges do this as well as making a shield from currents. Catfish are very slimy, so feel around on logs and rocks for proof they have been there. If you’re going to stick an arm into a dark hole, you might as well stick in a leg. A water shoe can give as much protection as a glove, and legs have a longer reach.

Even fishing with a rod and reel gets a bad rap in the United States sometimes. If just one person leaves behind fishing-related trash, it looks bad on all fishermen. Unsafe boating practices do the same when people need to be rescued. Being responsible on the water is how these sports will grow.

Catfish noodling is great for not using any gear like hooks and line that can be left behind. But a major reason why it’s banned in 34 states is it seems so dangerous for people to do. This is unfair as fewer people get hurt than do while traditional fishing, but new noodlers need to keep up safe practices to prove it.

Catch and release fishing is important during spawn times. It needs to be the number one practice then for catfish noodling. Most fish lay thousands of eggs at a time for a reason, because most of them will not make it to adulthood. Catfish have an important role in their ecosystem and many states’ economies. The channel cat is the state fish for Iowa, Kansas, Nebraska, Missouri, and Tennessee.

Many noodlers see the art as a tradition. It wasn’t just a sport in the Depression Era southern United States. A lot of families depended on it to keep food on the table, and those memories keep it alive as a useful skill. Honoring noodling in this way will help make sure people keep doing it ethically and responsibly.

Catfish noodling is a cool way people catch fish without anything but their bare hands. The term “noodling” is unique to the southern U.S. and has grown there as an extreme sport. Though seen as an oddity, it’s a brave and useful skill that’s been passed down by generations.