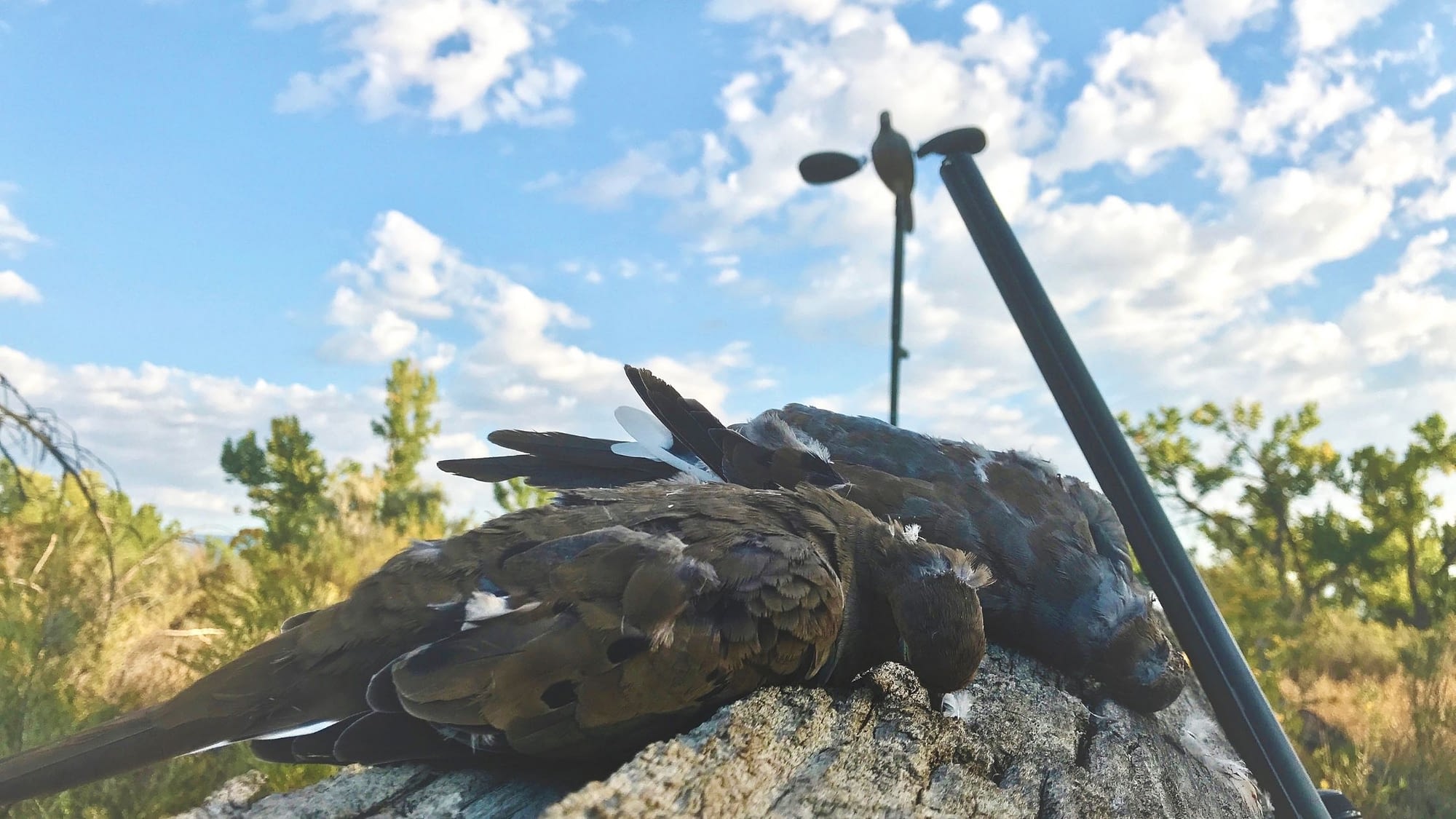 Dove hunting is a simple pleasure. All that’s needed is a shotgun and some birdshot. Add a stirred-up dule of doves to shoot at, and it’s one of the best pastimes the outdoors has to offer. Here are some tips to start next season off right.

There are many kinds of doves, and they live everywhere except the hottest deserts or coldest poles. Doves are in the Columbidae family of birds with pigeons.

There are three species in my neck of the woods legal to hunt: mourning doves, Eurasian collared doves, and white-winged doves. All feed on mostly seeds, grains, fruits, and other plants. A harvested wheat, corn, or sunflower field is a good place to hunt for dove. Another area they’ll congregate in are ponds with tall grass cover and a muddy bank.

Doves like open spaces. They feed on the ground and prefer a treeline or tall grass close by to escape to if needed. Some in the western part of the country also nest on the ground. Most others, in evergreens, mesquites, and cottonwoods.

From the gear to the techniques, nothing needs to be complex. New dove hunters need not think hard at the sporting goods store. I’ll go over some basic equipment and then how to stalk those delicious, cooing doves.

I’d love to shoot into a flock of birds with an 8 gauge like Viggo had in Appaloosa, but it’s illegal. Federal law prohibits anything bigger than a 10 gauge on migratory birds. But something in the 12 to 20 gauge works great.

It’s best not to get too fancy here, in case it turns out on the wrong side of the law. No need for pump-action and repeaters- any more than three shells loaded is also prohibited. Size 7 1/2 shot and an improved cylinder or a modified choke are what I like to use. Pellets don’t need to be big to drop dove. The extra amount and the spreading of the shot make hitting a small, moving target easier.

I’ve seen guys go dove hunting like it’s a commando mission. That’s fun, but any clothing that blends into the scenery works. I always wear a vest to carry extra ammo, some snacks, and water.

Pass-shooting is simply shooting doves as they fly past. This is the style most dove hunters use. It works best with a group of shooters to keep the dove riled up and in the air.

Most shotgun chokes used aren’t going to have a shooting range past 40 yards. Proper shooting position is important to hit them within that distance. The gun’s butt should rest snugly into the pocket of the shoulder. Then the cheek can lay on the stock for a quick and accurate aim.

Decoys can help bring flocks in range. Doves’ social nature makes them curious and not want to miss out on a good time. These can be clipped onto trees and fences or pegged into the ground. I spread them out in small groups and pairs. Dove often forage in pairs, so this is a more natural presentation.

Jumping or walking up on doves is more actual hunting than just shooting. On a slow day, this is what I revert to. It happens on those hot days in the south when everything is under the shade. But flushing dove out of cover can be another fun way to put birds in the bag.

Recent pressure from other hunters can make doves hunker down, too. If I’m jump-shooting, I make sure to wear orange in fields with other hunters around. Beating the bushes on the edges of these fields has the most success. Any dead trees or brush on the ground is a favorite hangout spot.

With a group, jumping and pass-shooting can be mixed with great results. Some of the party can flush out doves while the others shoot at what flies by. It takes a little more planning and focus on safety, but can really liven things up.

Doves are strong fliers. Mourning doves can reach speeds of 50 to 55 miles per hour. I struggled to get a limit of birds until I mastered a couple of savvy shooting techniques.

The first is called a sustained lead. This is positioning the barrel ahead of the bird in motion while getting the aim locked-in. The shot is taken just before the dove crosses the sight. Shooting directly at a speeding dove usually results in a miss.

Doves are the most hunted migratory bird in North America. They also have many protections under the federal Migratory Bird Act. If that’s not ironic enough, they’re also symbols of peace and friendship. There are some differences in state hunting rules, but these federal laws have to be followed everywhere.

The law says doves cannot be hunted anywhere that’s baited specifically for doves. Since farmlands are where most dove hunting happens, that law can seem confusing.

A State Extension Specialist says where doves can and cannot be hunted. So long as the purpose of any seeds is not to attract doves, it’s usually ok. Places you CAN hunt include:

Land where grain and seeds are put for normal agriculture.

Land planted by the state as wildlife food plots.

A blind that is hidden by natural vegetation.

A blind hidden by farm crops (so long as setting it up doesn’t scatter seeds around).

In my state and most others, a small-game hunting license and a HIP number are required. The Harvest Information Program is a mandatory survey. It’s used by wildlife management to keep track of harvest numbers.

All states that I am aware of open their dove hunting on September 1. It doesn’t last as long everywhere, however. In Colorado, for example, the cut-off time is November 1, a fairly short season.

The Eurasian collared dove is an invasive species. Almost everywhere in the United States, they can be hunted year-round with no bag limits. They taste just as good and can be 15% larger than mourning doves- a good fix for wing shooting addicts!

I love dove hunting because there’s always something new to learn. Those birds are quick and surprisingly smart at times. A few tricks I’ve picked up over the years have made my outings more fun and successful.

Most dove hunters just follow the crowds to find hunting locations. This works, but doves are sensitive to high hunting pressure. I also like the solitude away from other hunting parties from time to time.

Some states I’ve hunted in have an annual map or atlas. It lists all the places leased or owned by the state that allow public hunting. Often there is other great info in them, too. With landmarks and points of interest, even tips for local small-game, it’s great for planning a hunting adventure.

Early Worm Gets the Bird

I’m kind of dumb, so maybe nobody else will make this mistake. But my worst season ever was when I moved to Colorado from Texas. Migratory birds don’t always fly too much further south, and starting the season late isn’t a big deal in Texas. I was squinting and breaking my neck in late September in the Rockies. It didn’t help.

Decoys do work to bring doves in. But they respond even better with a little movement. Some brands feature spinning wings, and these can be a killer with the right set-up. Four stationary decoys on the ground and a spinning model clipped to a tree branch will do it.

I don’t go out without some rose or amber-colored shooting glasses. They decrease glare and shadows for spotting dove in cover and the sky. The color shrinks the pupils, which gives better depth perception. Lenses also protect the eyes in case I’m ever dove hunting with Dick Cheney.