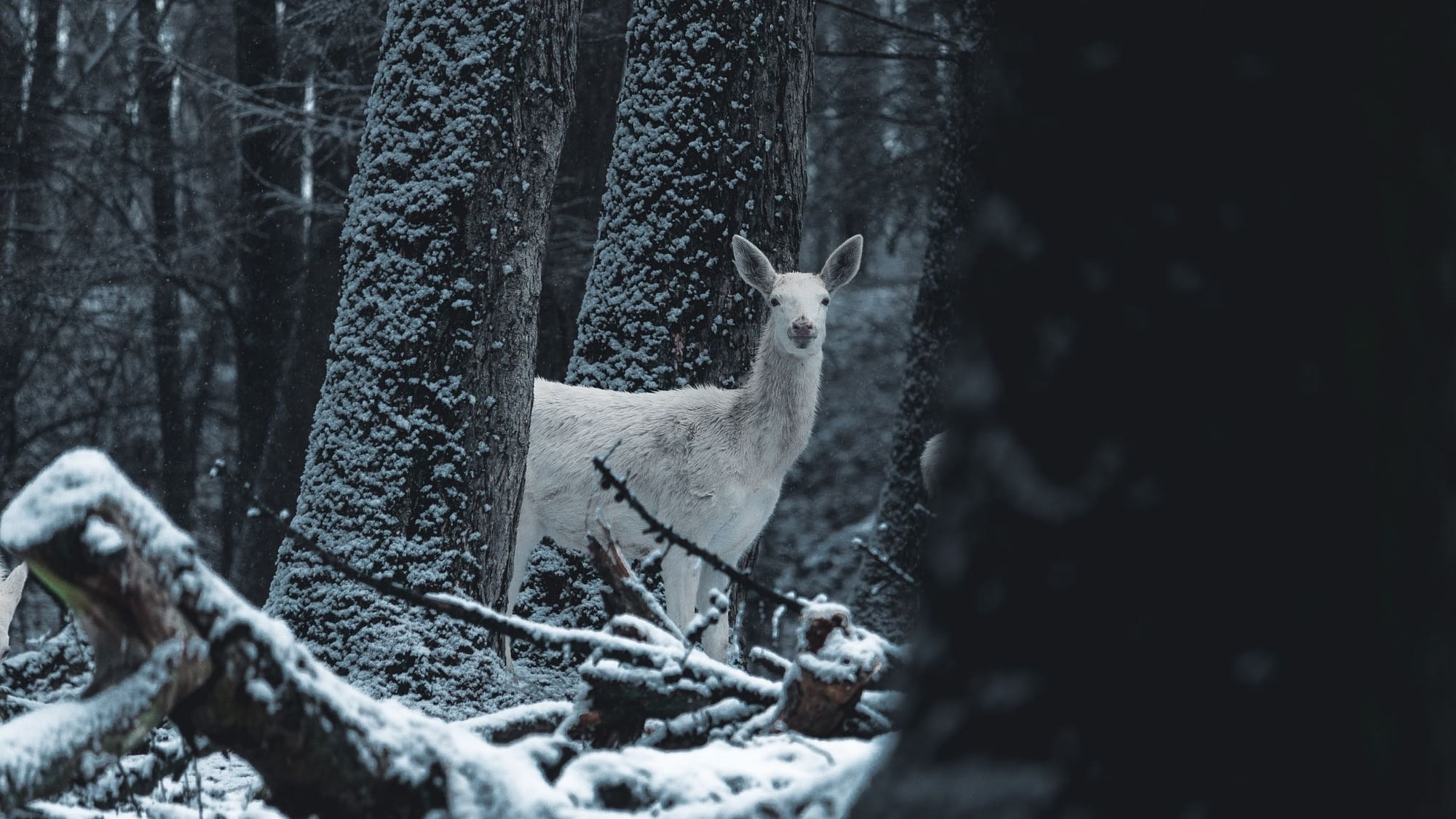 Albino deer, piebald deer, and melanistic deer are all unique. This is a topic that sparks interest amongst hunters across the U.S. Native Americans believe that a white deer is a magical or a spirit animal, and it is bad luck to kill one. Many tribes have different beliefs, but all believe an albino deer is not to be killed.

What causes albinism in deer?

Albinism is a recessive trait, meaning it must be inherited from both parents. A deer or other animal inherits mutated genes that affect the production of melanin. Melanin is the primary pigment that determines the color of the eyes, fur, and skin.

In the case of deer, this makes them almost snow-white. However, albinism can affect other animals. In non-mammal animals, they may not appear white as melanin is not the only pigment they produce.

The loss of color is also prominent in the eyes, leaving albino deer with pink eyes due to the blood vessels behind the lenses and no pigment in the iris. This is different from a piebald deer as they will have color in their eyes.

Albino deer number only 1 in 20,000 – 30,000 with different sources weighing in with various studies. In any case, that is extremely rare.

What does it mean for the deer?

Unfortunately for albino deer, surviving in the wild is not an easy task. Being without camouflage leaves them particularly vulnerable to predators. Not only this, but albino deer are usually born with deficiencies, most notably their eyesight. This puts them at a considerable disadvantage for finding food or noticing danger.

Some hunters also favor taking a white deer over a regular. However, in some states, it is illegal to harvest an albino deer. It is a hotly debated topic on whether hunters should kill an albino deer, with people and professionals weighing in from both sides. Some people claim that they should be offered protection, being that they’re a unique animal, while others argue that protecting albino deer weakens the herd’s overall health.

Are piebald deer and albino deer the same?

While both mutations affect the coloration of the animal, they are not the same. Piebald deer will have patches of pigmented and unpigmented areas. Their eyes will also have pigment. Piebald gene in deer is also recessive, like albinism. However, it is a lot more common than albino deer, with studies showing that 2% of whitetails are piebald.

Piebald is a type of leucism known as partial leucism. It occurs when just some of the melanocytes migrate from their embryonic source to the coat.

While piebalds still face a slight disadvantage in camouflage from predators, depending on their degree of pigment loss, they are usually perfectly healthy in every other aspect.

The rarest of them all, the melanistic or melanic deer, is the exact opposite of albino deer. These deer are black in color due to the excessive production of melanin. The gene that causes melanism is believed to be recessive.

Although there are no exact numbers known of how many exist, some people claim it to be 1 in 500,000. They are so rare; in fact, the first recorded incident by a scientist was in 1929.

Unlike albino deer, melanistic deer seem to fare better off in the wild. Their dark coat gives them increased camouflage, and there are no known sight deficiencies. However, melanistic deer are so rare there is still not much known about them.