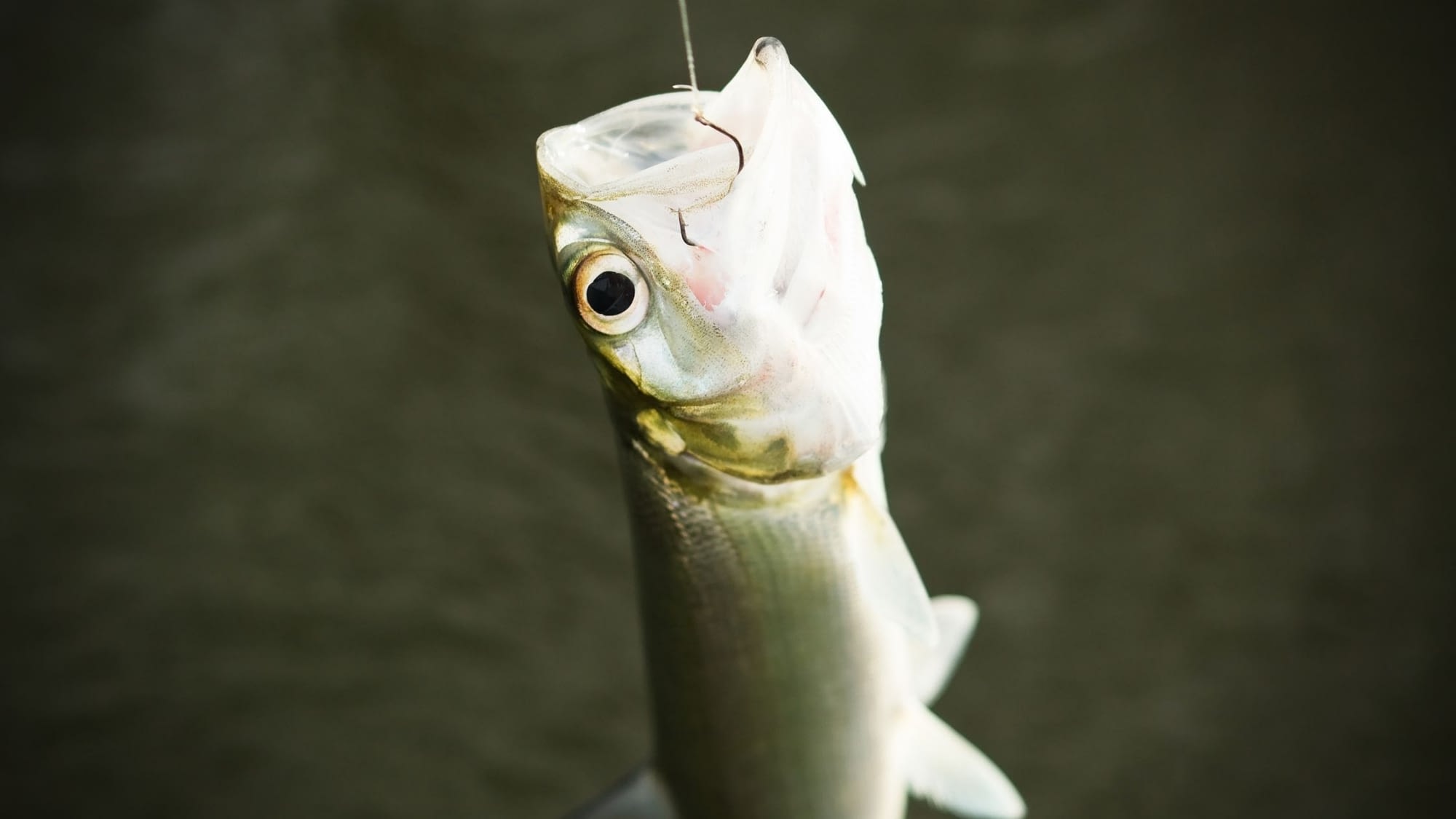 The Ladyfish is a ray-finned fish and are members of the Elopidae family. They are also popularly known as Jack-Rashes, Ten-Pounders, or Skipjacks.

Ladyfish occasionally venture into temperate waters, but are usually coastal-dwelling and found throughout subtropical and tropical regions. While they spawn out at sea, the fish larvae migrate inland and inhabit brackish waters.

This fish features a body that is fusiform (spindle tapering shape), laterally compressed, and oval at the cross-section. Large eyes provide excellent eyesight, and they are partially covered with adipose eyelids.

The diet of Ladyfish is mainly made up of shrimp and a large variety of smaller fish, which can be found within their habit. Adult skipjacks are voracious carnivores and are known to swallow their prey whole.

Adult specimens primarily feed on smaller bony fish like Silversides, Menhaden, and smaller ladyfish. They also feed on Shrimp and other Crustaceans.

They are targeted by recreational fishermen but not for their flesh.

Ladyfish are extremely bony and therefore don’t offer any commercial value. They are effective as live bait when targeting larger sport or game fish, and are a pretty decent dead bait option too.

Although they’re not great eating fish, they are ground down to make a fish meal. Ladyfish are great to catch, they don’t achieve great lengths but a 20 pounder can offer an exhilarating fight.

How do you catch Ladyfish?

When targeting skipjacks it is best to concentrate on the inshore waters of the Atlantic Ocean and the Gulf of Mexico. They can also be targeted from the beaches, inlets and in passes, and on the deeper grass flats in the bays.

Due to their satiable appetites, they can easily be caught on live baits and numerous types of artificial lures.

What is the best live bait for Ladyfish?

Bait Fish of any type are great live bait for targeting these fish, you could also use almost any small-sized fish that you can find in the area.

Ladyfish aren’t fussy eaters at all, but the best live bait that one can use is Shrimp. They make up a large portion of their diet and Ladyfish love them.

What are the best lures for Ladyfish?

These fish are aggressive feeders so targeting them with artificial lures is relatively easy. They are particularly attracted to flashy and fast-moving baits, but the most popular artificial lure in Florida is the grub and jig combination.

Jigs and Spoons are versatile lures, they can be fished at almost any depth and speed, and offer loads of shine and flash with exceptional long casting capabilities.

What fishing rod do you need to catch Ladyfish?

You will be surprised by the power of these fish for their size, and when hooked they will perform spectacular leaps out of the water in an attempt to spit your hook.

They can be described as small to medium-sized species and rarely exceed 22lb’s, but this doesn’t mean that they should be underestimated. At the same time, you shouldn’t go too heavy on your tackle, after all, you are fishing for sport and enjoyment, not food.

When choosing a suitable fishing rod, I recommend that you go for a 7ft – 8ft Graphite spinning rod, with a medium light-fast action. This rod is strong enough to stand up to the biggest of skipjacks but still offers significant sensitivity and flex.

What reel do you need to catch Ladyfish?

When choosing a Reel to target Ladyfish a medium-duty spinning reel will do the job. This size spinning reel also works really well with a 6ft-8ft light-fast action spinning rod.

I recommend that you look at a 4000 or 5000 medium-duty spinning reel, this option is ideal for targeting large specimens of fresh and saltwater species.

Ladyfish are notorious for spectacular leaps out of the water and vigorous head shakes, they will try anything in the book to get off your hook. For this reason, your rig has to be of the highest quality, with carefully folded professional knots to match.

·         Hook – When using live bait, the Circle-Hook is highly recommended. They are made from premium heavy-duty materials and are designed to hook the fish in the corner of the mouth.

This is great because Ladyfish are aggressive feeders and will consume their prey whole. The Circle-Hook eliminates any chance of a deep hook, a deep hook is when the fish engulfs the bait and gets hooked in the stomach or throat.

This unfortunately usually results in the demise of the fish. For Ladyfish and other types of catch and release species, the Circle-Hook will save many lives and greatly assist in population regeneration.

·         Leader – These fish have large eyes which results in excellent eyesight. I always recommend a leader when fishing, especially when targeting species like Ladyfish, Tuna, and Big Eye Travelle. Also important to note, that there is no need to fish with colorful beads on your rig when targeting these species.

They will identify the unnatural characteristics and turn away at the last moment. A leader is also important because Ladyfish attack your bait with such veracity. The leader absorbs the shock of this initial attack and offers some relief to the rest of your tackle. When targeting ladyfish, a 40lb monofilament shock leader will be sufficient.

·         Mainline – 20lb – 30lb braided line is ideal for targeting this species. Braid offers no line memory, exceptional casting abilities, and offers a direct and sensitive feel to the fish and its behavior.

·         Swivels – Swivels are often overlooked and anglers tend to economize on this part of their tackle. A large Ladyfish will test every aspect of your rig, and this includes your swivel.

From my experience, swivels that are made in the United States and Europe will be your best bet, you will pay a little more but it’s worth every cent.

Can you eat Ladyfish?

Ladyfish is definitely edible and should you find yourself in a survival situation, they will be perfectly healthy to consume.

Unfortunately they do not taste very nice, with the general consensus being that they offer a taste which is mushy and oily.

There are also a ridiculous amount of bones, which results in low meat content. Your best option might be to can the flesh. Due to a large number of bones, they are generally ground up for a fish meal to increase their consumable nature.

If you are wanting to try ladyfish this is my favorite recipe.

Ladyfish are coastal dwelling fish found in subtropical and tropical waters. They are also commonly known as Skipjacks, Ten-Pounders, or Jack Rashes.

They spawn out at sea but fish larvae migrate inland to inhabit brackish waters. They have large eyes with excellent eyesight, a body that is fusiform, laterally compressed, and oval at the cross-section.

The best way to target this species is by using live bait and artificial lures. Ladyfish are aggressive feeders and are attracted to flashy and fast mobbing baits. The best live bait is live shrimp, and the best artificial lure is a grub and jig combination.

Ladyfish is a great species to target recreationally, they are powerful for their size and often perform spectacular leaps out of the water when hooked. They, however, hold no commercial value.

Their taste can be described as oily and mushy, with large amounts of bones which results in low meat content. Ladyfish are often ground up into a fish meal to increase their consumable nature.