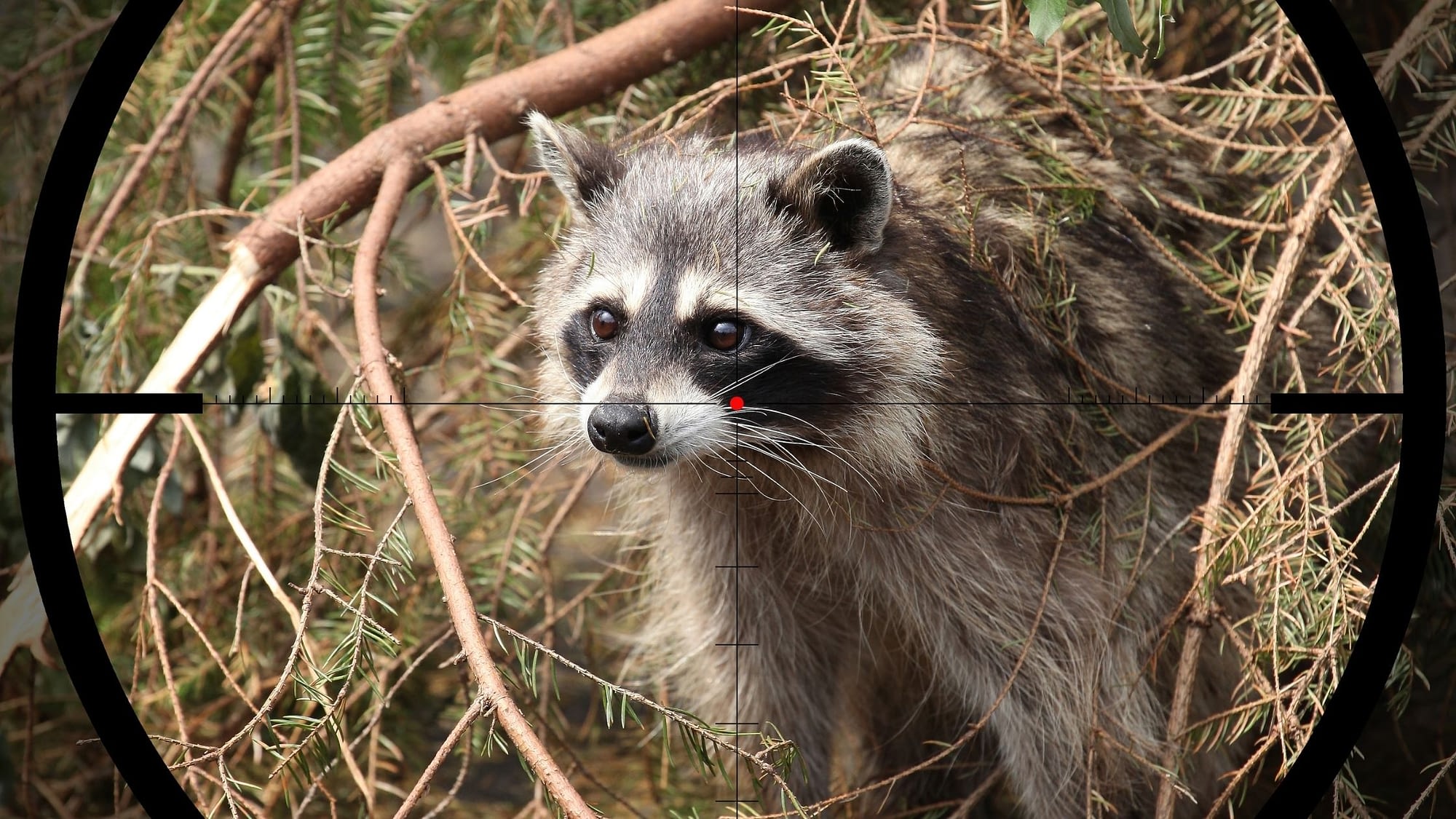 Raccoon hunting has been around for hundreds of years, and it continues to draw in avid hunters, although it’s been overshadowed by duck and deer hunting in recent decades. We have learned a lot from our coon hunting experience, and we hope this guide helps fellow hunters get the most of their time in the woods tracking these nocturnal creatures.

Is Coon Hunting Still a Thing?

Coon hunting was once a widely accepted pastime, especially in rural America where entire families would hit the field in search of coons. These mammals were in high demand for their pelts, which were used for fur coats and hats.

The fur trade has died down since the late 1900s, and while coon hunting isn’t as mainstream as it once was, it’s still a beloved hunting opportunity for many people.

Like other hunting activities, coon hunting is regulated by each state’s wildlife conservation department. Seasons and bag limits may vary from state to state. There are more hunting regulations now than at the height of the fur trade, but there’s still plenty of fun and friendly competition to be had while out coon hunting.

Where to Coon Hunt

Coon hunting is most common in the rural Midwest and the southern U.S. While raccoons are no stranger to urban areas, the best places to hunt for these animals are farmlands, wetlands, and woodlands. Areas with clear woods and remote pastures are best for safe and successful coon hunting. Raccoons may be found near abandoned buildings or out by swamps, creeks, and lakes.

A few of the top regions for modern coon hunting include:

There are many more places to hunt raccoons, considering they are found across the country apart from areas of the Rocky Mountains and southwestern states including Arizona, Utah, and Nevada.

We recommend checking each state’s hunting regulations to confirm where it’s legal to hunt coon and other game, keeping in mind these regulations may change each season.

Coon hunting can affect deer in the sense that raccoons often bother and even scare deer. It’s not uncommon for raccoons to cause stress to a deer herd by acting aggressively, especially near bait locations.

However, there’s a misconception that running hounds ruin grounds for deer hunting. This isn’t accurate, as a well-trained coonhound will not acknowledge or scare a deer. It’s only the untrained dogs you have to worry about.

The debate over coon hunting and deer continues anyway, with some deer hunters feeling passionate about sharing the same space with coon hunting activity.

Do Coon Hunters Eat Their Kill?

In the past, it was very common for coon hunters to eat their kill. For many in the 1700s and 1800s, coons were a main source of meat to feed the whole family.

During the 1920s, raccoon fur was trending, but by the time the Great Depression hit in the 1930s, impoverished families were hunting raccoons extensively to put food on the table and make a bit of money selling the pelts.

Of course, times have changed since then, but some coon hunters still eat their kill. Coon is even considered a delicacy in some countries like China with tough meat that tastes best tenderized.

The most common comparison to coon meat is squirrel. It needs to be cleaned and cook properly, but then raccoon meat can be boiled with seasoning and vegetables to create a flavorful meal. Raccoon is more tender and greasier than turkey or dark chicken.

Why Do People Coon Hunt?

There are several reasons why people coon hunt to this day, and it traces back to raccoon hunting history. In the 1800s and early 1900s, raccoons were hunted to make a living selling pelts. British and European settlers adopted this practice from the Native Americans who harvested raccoons for meat and fur.

The fur trade fluctuated throughout the 1900s, with the price of raccoon pelts reaching a high of $25-$30 each in the 1970s. Some people made their whole income, even six figures in certain cases, from coon hunting.

With talented dogs and a high raccoon population, it was possible to bag ten raccoons a night. However, this huge hunting demand died out in the late 1980s, and since then it’s been much quieter on the coon hunting front.

There are still thousands of avid coon hunters across rural America, and while most do it recreationally, some use coon hunting as their full-time job. Coon hunting is versatile and can be a shared family hobby reserved for a few weekends a year, or a weekly or even daily activity for enthusiastic hunting pros.

What Do You Need For a Coon Hunt?

The fur boom saw a huge rise in coon trapping as well as dog hunting. Trapping has died down in recent years, although many states with large raccoon populations allow trapping on private property to eliminate pesty animals. It’s always best to check with the DNR on the legal requirements for coon hunting.

With that in mind, a 22 caliber rifle or pistol is normally suitable for coon hunting with dogs. Every hunter may have their own preferences, but generally, you want to consider the size of the animal and how much damage the bullet would do. This is especially relevant if you plan to use the meat or fur.

Due to the dark conditions when hunting coon at night, lights for coon hunting are a necessity. New lighting technology allows for enhanced lights that illuminate raccoons without scaring them. These lights accommodate the raccoon’s color blind range and can be adjusted in intensity. With the right lights, coon hunters get more opportunities and successful shots.

There are several dog breeds preferred for coon hunting, known as coonhounds. Hunting with dogs makes it much easier to catch raccoons, thanks to the canine’s amazing ability to pick up and follow the coon scent.

The United Kennel Club recognizes six coonhounds that were bred for hunting purposes to efficiently trail a scent for miles.

As the first coonhound to be officially registered back in 1900, the Black and Tan Coonhound is a traditional hunting dog that does great in family homes. They have a calm temperament and are mellow inside the house, but once they are on the trail, they are independent and ultra-focused.

It can be challenging to pull these hounds off a trail they are tracking, but their strong nose leads to successful hunts, not just for coon but also big game like wounded deer, hogs, cougar, and bear.

Next to be registered was the Redbone Coonhound in 1902. Known for its sleek red coat and muscular proportions, the Redbone came from a selective breeding program with foxhounds brought to the U.S. by Scottish immigrants.

The Redbone is an agile hound that can chase small game and larger animals, with strong swimming and treeing abilities. These dogs are calm, gentle, and affectionate, with a constant focus on pleasing their owner, especially while out coon hunting.

It wasn’t long before the English Coonhound was registered with the UKC in 1905. This breed has the widest coor variation with bluetick, redtick, and tricolor coats. Originally bred out of the southeastern United States, English Coonhounds are best for hunting raccoon and red fox.

They have a mellow temperament but need routine exercise to stay fit for hunting. The English Coonhound is a favored breed for coon hunting, thanks to their powerful scent tracking and treeing abilities, although they may have a one-track mind when focused on the hunt.

Both the Bluetick Coonhound and the Treeing Walker Coonhound were originally classified as English Coonhounds, before splitting off and earning distinctive breed recognition in 1945 and 1946.

These efficient coon hunters are the most vocal of all coonhounds, so they need to be trained and exercised properly to avoid nuisance behavior at home. Bluetick Coonhounds have a lot of energy and don’t do well cooped up, which is why they should hunt and run regularly.

As a descendant of the American English Coonhound, the Treeing Walker Coonhound shares the same strong tracking ability and calm temperament. These speedy dogs especially enjoy human interaction and have a loud voice that tells hunters exactly where they are while hunting.

Other coonhounds are more cold-nosed, while the Treeing Walker Coonhound will drop older tracks for fresh ones, increasing the number of raccoons bagged in less time. This makes them the most common choice for competitive coon hunting.

The Plott Hound was the last coonhound breed, registered in 1946 and known for its dark brindle color, which earns them the nickname of “leopard-spotted dogs”. This is the only coonhound that descends from German boar-hunting canines instead of foxhounds.

Named after German immigrant George Plott, the Plott Hound became North Carolina’s state dog in 1989, and has been used for coon hunting and baying wild game for decades. The distinctive difference between the Plott Hound and other coonhounds is the lack of baggy skin. It was originally bred for bear hunting but has high endurance, stamina, and speed for reliable coon hunting.

It’s possible to hunt coons all year-round, but it of course depends on your local hunting regulations. As long as there is food nearby, coons should be active at night. The darker the night, the better, especially with a good set of outdoor hunting lights. There’s less raccoon activity when there’s a full moon, but otherwise, their scavenging activity keeps them busy in every season.

Here are a few key considerations for coon hunting throughout the year.

Although coon hunting has somewhat faded in popularity along with the fur trade, it’s still a beloved hunting activity for many outdoorsmen and women, particularly in the rural Midwest and South.

Like other game, raccoon hunting is regulated by the state DNR and seasonal limits may apply. With a trusted coon dog by your side, coon hunting can be a fulfilling recreational activity.